We always have one in both the Spring and Summer Shows but ‘no shows’ need not stop Grayshott Gardeners from holding a Photographic Competition for its members whilst still being partially “locked down”. Photos may be of any aspect of your garden and must have been taken during this year, 2020, by the exhibitor and submitted by the closing date of 30th September 2020. Click here for rules.

Although Grayshott Gardeners could not hold their Summer Show, no pandemic was going to stop them holding their annual “Potato Championship”, albeit in a different location from usual and with a different judge. With a total of 13 entries, all bagged, labelled and delivered, the number exceeded what we have had in a normal show for several years.

This year the variety chosen was the First Early potato “Swift”, supplied by Avalon, Hindhead. Members entered into the spirit of the competition and added an element of fun. One exhibit came as a basketful of small potatoes, just like a nest of eggs resting on shredded paper. Another had a potato decorated with the “COVID19 Rainbow”!

Who, it was asked, will judge?

In the absence of a qualified judge from the RHS Register of Judges, in this less than usual year, Mavis Hallt was invited to judge. The cup for the “Potato Competition”, the “Mike Hallt Cup”, was donated in memory of Mavis’s late husband, a keen vegetable and potato grower. With no previous experience, Mavis reluctantly accepted the invitation.

On the day of judging, the potatoes were laid out, 3 per plate, as in the schedule, on a table in the open air to comply with “safe distancing”!

Mavis arrived complete with Mike’s copy of the “RHS Horticultural Show Handbook” opened at the page for “The Judging of Vegetables – Potatoes”, detailing the merits and defects to be considered and the “Advice to Judges”.

Mavis had taken the invitation very seriously and clearly done her homework beforehand. The “Advice” included a checklist of criteria to be taken into account when judging potatoes and a weighted points scoring basis on which to judge Condition, Uniformity, Shape, Eyes and Size (not being of main importance). Once Mavis had carefully looked at all 13 entries, she made a shortlist, each one of which was diligently scored against the RHS checklist. When marked, Mavis then reviewed the scores to ensure her marking was consistent. The process provided a result:

As Helen Deighan, last year’s winner, had returned the cup, the opportunity was taken for Mavis to “informally” present the cup to Mary Herbert who had called in to look at the entries. A photo of the “arm’s length” presentation was taken!The cup will be engraved and formally presented to Mary at a future GGs’ meeting when, hopefully, we are back to something nearer normal.

Thank you to everyone who entered this one-off “fun” 2020 competition, which has helped to keep the GGs going in this long period of “lockdown”.

However difficult, “where there’s a will …!”

In the event of Grayshott Gardeners being unable to hold the Summer Show on July 11th 2020, our President, Gordon Rae, has come up with a cunning plan to rescue the Potato Competition (class 49) and grasp the Mike Hallt Cup out of the clutches of the coronavirus (without contravening any Covid19 regulations). Click on the link for alternative entry and judging arrangements: potato competition rules

Grayshott Gardeners members are encouraged to PLEASE ENTER just for the fun of it and to make 2020 a record entry year, just to keep us all sane!

After the event, the President and his lady will eat the entries!! (and Judith will be presented with: 1001 tried and tested recipes with potatoes)

Anne Waddell and helpers added a colourful note to the fair in Grayshott on Saturday, with fragrance provided by Gill and Jan in the form of Lilies of The Valley. There were plenty of takers, both young and old, who stopped by to hear and read about Grayshott Gardeners. A great effort, which may well result in some interested youngsters becoming future members!

The 2019 Spring Show organised by Grayshott Gardeners again proved a great success, with many entries, despite the period of freaky weather preceding the show. A total of 139 persons enjoyed the the exhibits and other attractions presented by the teams. Results and a brief report on the Shows page here, photo gallery to follow soon.

We are thrilled to announce that the Snow Cup, the annual flower arranging competition open to local  horticultural societies which was hosted by Headley at their Autumn Show on Saturday, was won by Grayshott Gardeners, with Telford in second place and Headley coming third. It is the first time GG have won since 1995! Well done to Gill Purkiss for her imagination, ability to be creative and for arranging everything so well, with help from Suzi Gordon. 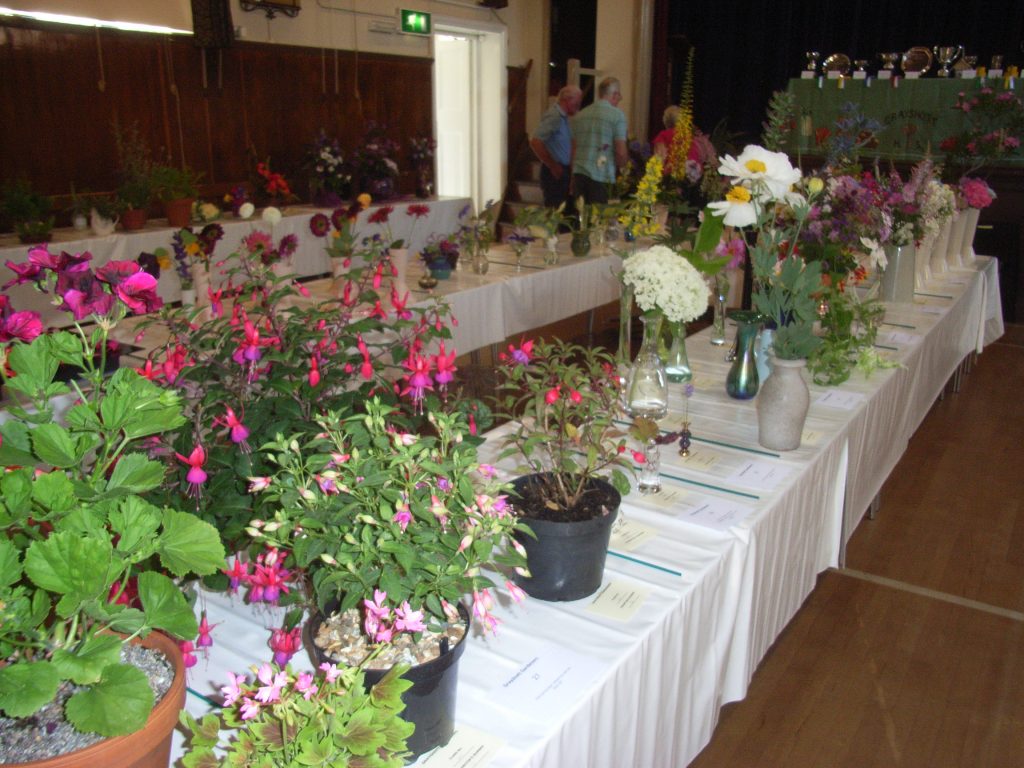 Grayshott Gardeners chalked up another triumph with Saturday’s Summer Show 2018. Despite the dry and hottest June for many years, there were masses of colourful plant and flower displays and mouth-watering fruit and vegetable exhibits. The Floral Arrangements were especially spectacular and admired by the many visitors to the Show, who had foregone Wimbledon and England’s bid for the World Cup in order not to miss this annual highlight put on by Grayshott Gardeners’ Show Team and the members who entered one or more of the 229 items in 76 different classes. The Juniors comprised a particularly strong contingent with their dwarf French Beans grown in jam jars (Open Classes), which augurs well for the future of Grayshott Gardeners.

Having enjoyed the sumptuous display, including entries for the Close Brooks Cup which Grayshott hosted this year and was won by Tilford with their box of beautifully displayed vegetables, visitors welcomed a cup of tea and a home-made cake served by the Catering Team, only to be waylaid by Karen and the Plant Sales Team with a tempting offering of plants. Free entertainment was also provided by Karen who had inadvertently given a lift to some juvenile frogs who played hide and seek in the tea room! Home-grown and very tasty cucumbers proved an additional attraction.

A list of this year’s Summer Show Trophy winners is provided here , and on the Shows page. PHOTO GALLERY (photos by John Price) on the photo gallery page or here

This  annual event proved again a resounding success, thanks to the many members who grew, potted on and then helped arrange, price and sell the countless plants on display, all skillfully and efficiently directed by our Chair, Karen Flood. The Grayshott Plant Sale has a reputation for low-priced quality plants, and there was no shortage of customers, many who arrived with baskets and out-sized carriers, and left delighted with their haul. The catering team under Sue Debenham  was on hand to revive anyone in need of a sit down and refreshments whilst considering where to plant their purchases.

Treasurer Dennis Homer was well satisfied with the fundraising result, as was Programme Officer Terry Boorman, who will no doubt continue to arrange for the very best speakers at our Club Night Lectures.

Committee Member John Price has been busy taking many photographs, which are displayed on the photo gallery page. 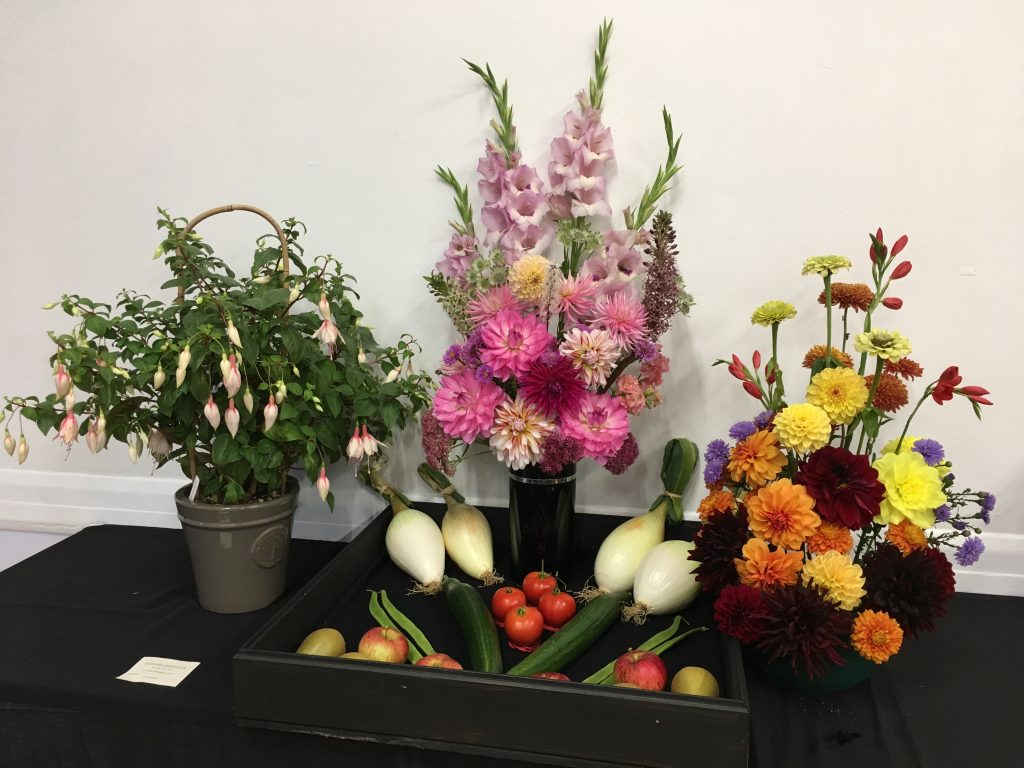 Many thanks to Gill Purkiss for co-ordinating our entry and the members who contributed the plant, flowers, vegetables and fruit. Next year Grayshott will be hosting the competition in Grayshott.

There are 45 notable pink colours listed on Wikipedia, a number easily surpassed on Wednesday. Pink balloons, pink flowers and tables decked out in pink awaited our members, who themselves had made a great effort to dress up in, you guessed it, pink – rose pink, salmon pink, hot pink, shocking pink (and that’s just the men). Pink bubbly added to the rosy glow which soon descended on the visitors, resulting in animated conversation which was interrupted only by the serving of salad with chicken and pink-hued ham. The challenging quiz set for the interval turned a few members puce, but was fairly won by the pink table, and the person in the pinkest attire was Anne Noyce.

One question remains unanswered: who is sitting on those fifty pink balloons, last seen stuffed in a king size pink duvet cover?